Community Activists individuals are broadly reflective of the overall population in terms of key demographics, although they are a little more likely to live alone in single person households, and to hold a college degree. Individuals here are twice as likely as the average citizen to identify with left-leaning politics. 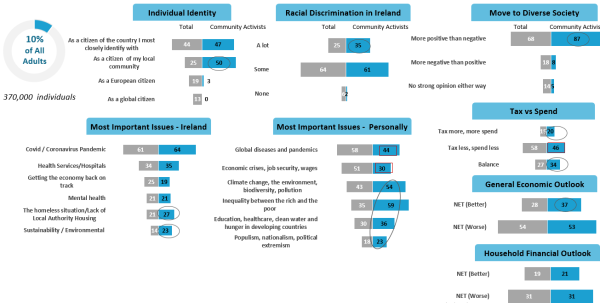 In addition to the country they most closely identify with, those in Community Activists are a lot more likely than the average individual to identify as citizens of their local community. While preoccupied with the same broad personal and national issues as everyone else, Community Activists individuals are disproportionately exercised by the inequality between the rich and poor, climate change, inequalities in developing countries as well as populism/political extremism.

Practically all individuals in Community Activists express concern about poverty in developing countries, with approaching three-quarters of them of the view that such countries can make real progress with the correct supports in place. Motivated to support helping developing countries on the basis of basic human rights and a sense of shared humanity, this segment attributes poverty in those countries to the behaviour and policies of wealthy, powerful, countries.

How do we reach them?

Community Activists is most likely to identify the power of special interest groups and local community initiatives to prompt real social change. Higher than average consumers of all types of media in general, these individuals also over-index in their use of social media.