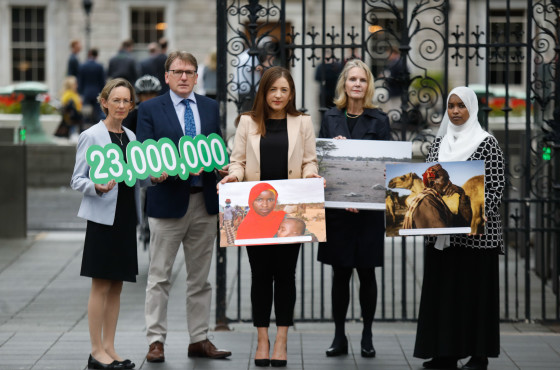 Irish development and humanitarian organisations have joined forces to urge greater political action on severe hunger in the Horn of Africa at a briefing to Irish politicians in Dublin today (Tuesday 16th June).

Irish development and humanitarian organisations have joined forces to urge greater political action on severe hunger in the Horn of Africa at a briefing to Irish politicians in Dublin today (Tuesday 16th June).

23 million people (4.6 times the population of Ireland) face severe hunger in Somalia, Ethiopia and Kenya this year, as further delayed rains exacerbate what was already the worst drought in four decades.

·         In Somalia, where famine is looming, 350,000 children could die by the end of the summer, according to recent United Nations predictions.

“The threat of famine in the 21st century is, above all, a political failure. We are now facing the consequences of years of inaction. The failure to address the deadly combination of climate change, conflict and the economic consequences of the Covid-19 pandemic has left the region in extreme crisis,” said Jane-Ann McKenna, CEO of Dóchas, which collectively represents the Irish development and humanitarian organisations calling for action.  “This is now exacerbated by the disruption of the global economy and food systems as a result of conflict in Ukraine.”

Dóchas is hosting the political briefing at which four representatives from Concern Worldwide, GOAL, Oxfam Ireland and Trócaire will explain to politicians the reality for the people of Somalia, Ethiopia and Kenya and urge the Irish government to demonstrate and hold firm leadership at an international level to ensure an immediate and radical mobilisation of aid in the region.

The UN estimates that humanitarian funding of US$4.4bn is required to provide life-saving assistance and protection in the region. At the time of writing, the appeal is drastically underfunded.

Ten years ago, despite Irish NGOs sounding the alarm on famine in the Horn of Africa, a delayed international response led to the deaths of over 250,000 people, a large majority of which would have been preventable given the proper funding.

This time around, governments and the international community have failed yet again to heed the calls for action. Clear, repeated, and credible early warnings have been ignored for more than two years and the number of people facing crisis levels of hunger in the region has more than doubled to 23 million people since last year.

“We need political action and leadership”, said Ms McKenna “We can end this hunger crisis if we act now, and if we act collectively. Ireland, with its own experience and legacy of famine, is uniquely positioned to lead by example and mobilise the international community to respond at speed and scale.”