We are part of a much bigger community 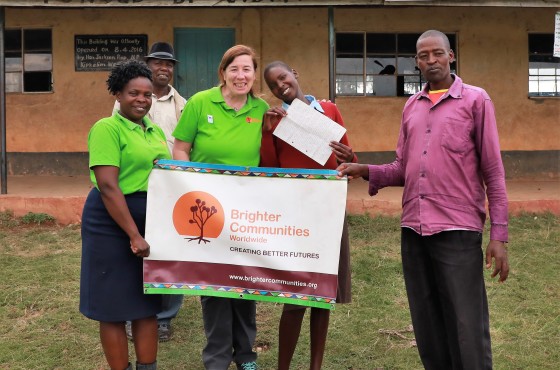 "The fear of food security in the Horn of Africa is real. It reminds me that solidarity and inter-connectedness is vital as it could be us tomorrow. It was us at one point." - Maria Kidney

Growing up in Cobh, my parents taught me the importance of community engagement. They were change makers, volunteering their time in so many areas and because of that influence, I’ve spent my career doing the same, overseas.

I wanted to do some volunteer work overseas when I was in college, but it involved taking two years out and I couldn’t afford it.  Then, while working in IT in my early 20’s, I went on a trip to climb Kilimanjaro in Kenya with a group of friends I’d met through Scouts and Guides.  While there I was mugged and sought refuge in the Kenya Girl Guide Headquarters for a week and while there met lots of people working in various development projects. I was so incentivised by what I saw, I wrote to a number of projects when I got home to ask if there were any ways I could help.

A group of 20 Guide Leaders were invited out for three weeks to a place called Londiani, Kericho, in the Rift valley where we worked with some HIV projects, children’s summer camps and women in the community. We made such a connection with the community that when we came home, seven of us set up the charity Brighter Communities Worldwide and, twenty years later this month, I’m still volunteering in Kenya.

Today we work in health, education and economic empowerment. All our work is community based, helping people be their own catalyst for change. This means projects are designed by the local people who are coming up with their own solutions to issues; we are merely facilitators.

The Irish tradition has always been outward looking, with Irish people travelling the world and making an impact, sharing our expertise and open culture. I grew up seeing the influence of Ireland’s overseas aid. I remember one teacher encouraged us to write to the development organisations and get answers to questions for school projects in the days before internet and mobile phones. There was a real sense that we were part of a much bigger community.

Both my parents were involved in community volunteering and that influenced me in a big way. All the skills I learned to use in Kenya were the skills I learned here in the Irish community. My dad was a local Mayor who worked for the scouts and local council and was very active all his life.  My mum was involved in youth athletics, youth services and community drugs and alcohol projects. I was always encouraged to get involved and try and make a difference.

The only difference between the people I work with in Kenya and Ireland is opportunity.  There is no difference in what they want for their kids; it is exactly like parents here do. They also want the same for their communities.

That culture of community is as transferable in Cobh as Kenya. I liken it to the Tidy Towns project here. Years ago, Cobh was beaten down, with industries withdrawing and the recession hitting. The community came together and it’s been an amazing transformation by people working together to change the community in which they lived.

I continually see how one small step up can transform not just an individual, but a family and then a community.  In our team, Chelat manages 360 schools in a health school programme. She started as a cleaner in a clinic in 2005, having never finished school because her parents couldn’t pay her school fees. We paid her fees to allow her to finish and she then travelled three times a week to college to study nutrition and social work. That meant walking 19km each way because there was no transport or no roads to get a bus. She is a single mum and her daughter has just finished school and is about to train as a nurse. Now running these 360 schools, Chelat often tells us that without our intervention, none of this would have happened. That one small investment has had such a compounded impact on so many.

That’s why our reach is far greater than the size of our team. On average we reach 160,000 people directly annually, and 920,000 since Covid because we have a network across the country to distribute vaccines, soaps, hand washing buckets etc. That’s the argument for investing in people, empowering them to group together and activate to respond locally.

Another woman, Betty, lives in the slums in Londiani. I met her in 2009 when she joined our business programme. She was a subsistence farmer who learned the skills to make that a business, and she has put the work in. We gave her start up capital in the form of resources such as chickens. She has now put her three children through college. The return on that investment is there to see. The investment in her was about €100 and look at the exponential impact on her, her community, her children, and how they will impact their community going forward.

It’s a difficult time in Ireland to raise money because there is so much else going on but there’s no comparison to the hardship in Kenya. The fear of food security in the Horn of Africa is real. It reminds me that solidarity and inter-connectedness is vital as it could be us tomorrow. It was us at one point.

This article first appeared on Cork Beo on 22nd September 2022