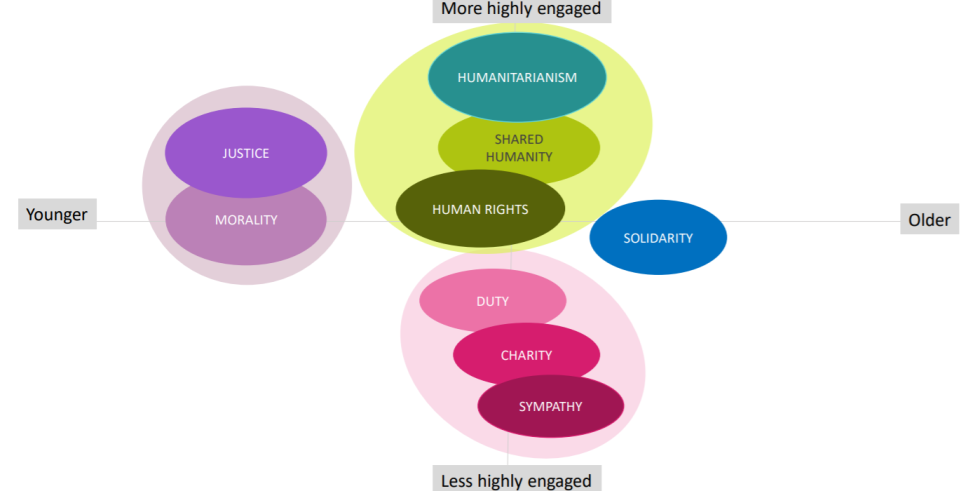 The qualitative wave involved a series of six focus groups with the primary objective of exploring the motivational and emotive underpinnings of the survey data. The follow sample composition was adopted:

The qualitative research findings reveal more about people's perceptions, levels of awareness and understanding as well as the main drivers of and barriers to support with verbatim quotes.

I don’t see aid as just money myself. I see it like it could be given in other ways. Food. Clean water, the likes of a vaccine or any health-related stuff so helping the overseas hospital with medical equipment or sending maybe people from the Irish field of working just from Ireland or doctors from Ireland over to other countries to help them develop.

Straightaway to me, it means sadness and poverty, you know, you’re going back, as I said earlier, to the overseas aid, where we call came and had the great thing for Live Aid now, It still means the same thing, you’re looking and you’re thinking of little kids starving to death.

I’m thinking of, like it’s not the first thing that sprang to my mind, but military aid as well. I think we have, everything that everyone has said so far has been humanitarian, but overseas aid could be America selling weapons to a country for example, you know what I mean, there’s not just humanitarian aid is what I’m saying, or maybe that’s what you are focusing on.

Over the years we must have raised trillions and trillions of Euros for Dóchas or whatever. Kind of wonder is it all just waste. Is it a waste of time I personally think it’s a good idea, don’t get me wrong but every year its coming back that different countries need help and it’s a non ending issue. So I am kind of aware of where the money goes. Does it go to the right people at the right time and into the right places?

Well for me, when I think of overseas aid, you think where it goes to a lot of countries where there’s an awful lot of corruption, Governments, especially in African countries like that. Governments have taken a lot of the aid that’s given and are just give out the scraps to people that need it.